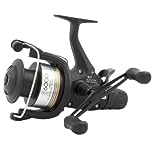 In classic black with an XT7 spool finished in silver, the ST models are packed with far more advanced features than you’d reasonably expect to find on what is now the entry level Baitrunner. Line lay is immaculate thanks to our Varispeed system which involves an oval and a square gear computer engineered to interact perfectly. No longer do you need big money to buy big performance free spool reels.

If you are a carp fishing beginner or an experienced bait maker you can always learn something that will make a huge difference to your success! Semolina is one of the most used carp bait ingredients in recipes but why is this? Semolina carbohydrates are utilised for energy, and other roles and nutritional functions too! Semolina is one of the basics of carp baits so find out deeper details on what it is, how it is best used and why carp like it!

It is my assumption that besides eggs and many other common kitchen and cooking foods that pioneering bait makers tried in their carp baits, that semolina was something people tried and found in the beginning to be functionally useful. Semolina is certainly a carrier substance which means it can be exploited in boilies and other baits by utilising its capacity to absorb any of many diverse liquids.

Winter or in fact any other time of year is great for semolina as it is such an invaluable carrier for whatever stimulating liquids within your baits plus it helps makes bait more economical!

Just add boiling water to semolina powder and you will notice how this reacts with the gluten, lectin, starches etc in it making it bind together. When it cools you can take out a tasty solid mass which was once a flowing granular powder! I’m sure like me, many homemade bait makers notice this property and utilise this property! Of course anyone who has ever added sugar or strawberry jam or maple syrup, or cinnamon to their semolina knows how useful semolina is as a carrier for more palatable substances which make you eat more!

Semolina is as its simplest a functional binding bulking ingredient not merely for boilies or pastes but a myriad of ground bait formats and other baits too. Its use as a cheap, economical binder means it has been a mainstay in carp baits for decades. I do wander why semolina has been used like this as opposed to other carbohydrate binders and starch and other energy sources and I have some personal suggestions having used both hard and soft forms of wheat flours and meals for decades.

In terms of nutrition, proteins have been presented as the most important factor in making carp baits. There is a massive difference between making baits that fulfill a range of essential nutritional requirements, compared to baits which are truly optimised to trigger fish feeding! All you have to do is look at the ingredients lists of premium grade koi fish foods and aquaculture feeds to realise such foods are not truly optimised to make fish feed as these are compromises of fish feed-triggering and essential nutritional requirements supply.

Baits certainly do not have to contain essential nutritional elements to trigger excellent fish feeding! This is comes as a relief to people worried about the complexities of amino acids, peptides and optimising actions of carp digestive enzymes etc and you can certainly make baits without proteins and out fish protein baits, this is even if they are enzyme-active or optimised for digestion.

Carbohydrates as found in wheat flours including hard durum wheat flour (semolina) in the past used to be considered part of inferior baits, even as so called crap baits as their convertible nutritional value and also feed-trigger density are lower compared to other ingredients which are far more potent in those properties and characteristics, yet carbohydrates are vital to carp!

Not only this but so-called crap baits of low nutritional value have caught literally millions of carp including many lake records and even a big 60 plus lake record from Rainbow Lake in the past! Even extremely popular circuit waters have been torn apart by semolina carbohydrate baits, including the capture of most of the big fish in Darenth big Lake when over a ton of such baits was used in one season to my certain knowledge!

Carbohydrates have extremely valuable health and roles internally. Many ways that essential proteins such as essential and semi-essential amino acids are utilised within the body involves the formation of critical substances which are formed from the combining of carbohydrate molecules and amino acids, including such things as protective fish slime and protective mucus that is secreted over the eyes and receptor sites such as in the nasal cavities. It is such linings that ensure that fish do not immediately dry out and are critically damaged when you remove them from water upon capture!

I guess you can appreciate now how much more important it is to keep fish in the cool and shaded and provided with water to keep them moist when out of water, most especially in the heat of summer and also in windy conditions too!

I guess the reason that semolina became more popular (in boiled paste boilies) than soft wheat flour, was that apart from its binding qualities in baits, hard durum wheat flour (semolina) is also a bait hardener, not instantly water-soluble and is practically a substance that makes sticky bait recipes more able to be rolled into balls in rolling table and easily extruded by machine etc without problematic sticking.

Semolina makes baits firmer and more resilient that ordinary fine soft wheat flour. But now everyone knows that hardness does not stop so-called pest species consuming the hardest of baits anyway! Personally for homemade pastes I prefer soft soluble wheat flour not semolina, but certainly for those wishing to roll boilies it is a practical ingredient.

In my experience there is absolutely nothing at all negative about softer baits especially using more water-soluble binding substances like ordinary wheat flour or genuine whole meal wheat flour! I have caught numbers of bigger carp using soft wheat flour in my baits and not semolina, and it’s also a valuable part of my ground baits of many formats too! Semolina is not as soluble and not as energy-efficiently digested by carp.

Soft wheat flour is also much less used so that is another great edge and let’s not forget that bread used in stick mixes etc is made from soft high gluten very soluble fine soft wheat flour! Revealed in my unique readymade bait and homemade bait carp and catfish bait secrets ebooks is far more powerful information look up my unique website (Baitbigfish) and see my biography below for details of my ebooks deals right now!

THIS REEL IS FOR SALE ON EBAY.COM.AU ITEM NUMBER IS 130592060003 WILL START AUCTION AT 8PM SYDNEY TIME TONIGHT AND WILL END TUESDAY NIGHT 8PM NEXT WEEK
Video Rating: 0 / 5

Gaz Fareham discusses the benefits of travelling lighlty while carp fishing. He explains the importance of having quality luggage, such as Shimano Tribal Xtreme rod holdalls, and how you can stay light when travelling around swims.

Buy all your Ultima Products in Our Ebay Shop or our website. stores.ebay.co.uk www.cap1.com A guide to line, rigs and catching big carp. Featuring Ultima consultants including Steve Renyard, Ardy Veltkamp, Pete Wilson, Koos Walters, Felix van de Marcel, John Richards and Stephen Buss. Presented by Joe Morgan of Carp TV Join the Ultima Carp Team at the fantastic French Venue Etang de Pierre as they share their knowledge on how to get the most from a French Carp trip, and provide demonstrations on casting, line care, spodding, marker work, fish care, bait preparation, plus Steve Renyard on some new and some classic rigs and much more.
Video Rating: 4 / 5

The Crafty Tackle boys annual fishing trip to France, Dream Lake 5 in July 2008. Please check out our ebay shop where you can buy all the rigs used to catch the stunning carp on all my videos. CRAFTYTACKLE.CO.UK stores.ebay.co.uk Log on and up load all your catches at www.craftytackle.com
Video Rating: 5 / 5

Terry hearn from tackle company ESP spends a minute or two giving us his top three carp fishing tips! To view all the ESP tackle online click the link below: www.anglingdirect.co.uk
Video Rating: 4 / 5

25 PC and a few extra! Complete fishing lure and tackle box set has a large S

THIS IS ONE OF OUR TOP

CUSTOMER FEEDBACK – something very good value thats why I bought 3